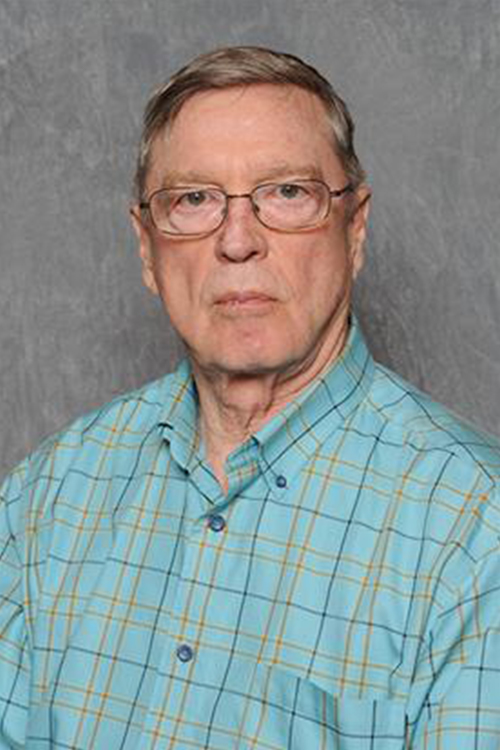 Regents Professor and Director of the School of Molecular Biosciences

Dr. Michael D. Griswold, Regents Professor of Molecular Biosciences at Washington State University (WSU), is world-renowned for his contributions to our understanding of Sertoli cell structure and functions and the crucial role of Vitamin A in spermatogenesis and a loyal member of Society for the Study of Reproduction (SSR). Mike received a B.S. in Chemistry and Ph.D. in Biochemistry from the University of Wyoming. He conducted postdoctoral studies with Dr. Philip Cohen at the University of Wisconsin, funded by an NIH Postdoctoral Fellowship, working on amphibian metampophosis, and with Dr. Flauco P. Tocchini-Valentini in Rome, funded by an EMBO Fellowship, on Xenopus RNA. Mike spent a year as an Assistant Professor of Pharmacology at Baylor College of Medicine in Houston. He then spent two years as a Research Associate in the laboratory of Dr. Irving Fritz at the University of Toronto, where he acquired what would become a life-long interest in Sertoli cells. Mike joined the faculty of WSU in 1976 as an Assistant Professor of Biochemistry and Basic Medical Sciences, was promoted to Associate and then full Professor, appointed Chair of the Department of Biochemistry and Biophysics in 1994, Director of the School of Molecular Biosciences in 1999, and Dean of the College of Sciences, a position he held from 2003-2010. Mike became a Regents Professor of Molecular Biosciences in 2008, and in 2011, received the WSU Eminent Faculty Award, the highest faculty honor at WSU.

Mike’s research has been continuously funded by the NIH since 1977 (with the same grant “Hormonal Control of the Maturation of Sertoli Cells”), including a Research Career Develop Award (1979-1984) and MERIT Award (1997-2007). He has published more than 230 original scientific articles, book chapters, and review articles. His recognition in the field of Sertoli cell function and spermatogenesis is evidenced by his many keynote addresses that include the SSR President’s Symposium (1994 and 2007), Larry Ewing Lecture at Johns Hopkins University (2001), Andrew Nalbandov Lecture at the University of Illinois (1993), Asdell Lecture at Cornell University (2008), the Bailly Lecture at Southern Illinois University (2010), the Serono Lecturer at the Andrology Society (1994), and the Distinguished Faculty Address at WSU (1994). Mike received the WSU Sahlin Excellence in Research Award (1999) and the SSR Research Award (2006), and became an AAAS Fellow in 2009. In addition, he was the 2013 recipient of the Carl G. Hartman Award, one of the most prestigious award conferred by the Society for the Study of Reproduction.

Mike is an exemplary mentor. He trained 7 MS students, 24 graduate students that include Mike Skinner, Ken Roberts and Leslie Heckert, and 26 postdoctoral fellows and research associates that include Carlos Morales, Kwan Hee Kim, Carol Linder, Dereck McLean, and Cathryn Hogarth. Mike received the Frontiers in Reproduction Beacon Award in 2008 for his outstanding mentoring. One of his former students, Leslie Heckert wrote: “His high expectations returned dedication, creativity and independence from the members of his laboratory, which in turn produced a vibrant and exciting research environment. He led by example, support and occasionally by providing unsolicited words of encouragement...”.

Mike has unselfishly served his profession, SSR, the Andrology Society, and the Testis Workshop. He was a member of the SSR Board of Directors (1989-1992), SSR Annual Meeting Program Chair (1998), SSR President-Elect and President (1997-1999), Andrology Society Board of Directors (2000-2003), and Program Committee Chair for Testis Workshop (1993 and 2007) and Andrology Society (1996). He served the NIH on the Reproductive Biology Study Section (1983-1987, and continues to do ad hoc reviews for the NIH. Mike has also served as an Editorial Board Member for Endocrinology, Journal of Andrology, Biology of Reproduction, Endocrine Journal, Molecular Cellular Endocrinology, and Spermatogenesis.

Mike’s contributions to Sertoli cell physiology and spermatogenesis are impressive. His lab demonstrated in 1980 that vitamin A modulated Sertoli cell function, in 1987 that vitamin A altered Sertoli cell gene expression, and in 1987 in a landmark publication with Carlos Morales, that retinol induced synchronization of seminiferous tubules in vitamin A-deficient rats. The crucial role that vitamin A plays in regulating germ cell entry into meiosis is still being investigated today not only by the Griswold lab but also by many others in the field, including Kwan Hee Kim, Peter Koopman, and David Page. Moreover, Mike’s leadership role in this area is evidenced by his collaborative publications with John McCarrey, the late Lonnie Russell, Martin Dym, Bob Braun, Kate Loveland, David Zarkower, Marvin Meistrich, and Paul Cooke.

Mike’s lab pioneered microarray/gene profiling analyses of FSH-treated Sertoli cells, beginning in 2002, followed by analysis of spermatogonial stem cells, testis, seminiferous epithelium, epididymis, spermatogenesis, and embryonic development of the testis. These databases are freely available to the scientific community. The number of investigators across the world that have used these data bases is remarkable.

As evidenced from the comments above, Mike has been at the forefront of research in male reproductive biology for the past three decades. Leslie Heckert wrote: “His ideas, approaches, and results have enhanced our understanding of Sertoli cell and gamete function, improved animal models and methodologies for the study of spermatogenesis, and precipitated new concepts in testis biology, contraception and infertility. Because of Dr. Griswold, more is known about the role of retinoic acid in regulating meiosis and the cycle of the seminiferous epithelium, the actions of FSH and testosterone, Sertoli cell function, and the characteristics of spermatogonial stem cells.”

Normal fertility in the male requires the constant production of large numbers of gametes over a long time period. Spermatogenesis is a very complex, highly organized and regulated process that involves mitosis, meiosis and unique pathways of differentiation. In general, spermatogenesis involves three major biological fundamentals: (a) the renewal of stem cells and the production and expansion of progenitor cells (mitosis) (b) the reduction, by one-half, of the chromosome numbers in progenitor cells (meiosis) and (c) the unique differentiation of haploid cells (spermiogenesis). Early progenitor cells or spermatogonia are defined as “undifferentiated” or A spermatogonia in the mouse. Once the spermatogonia enter the “differentiation” pathway they begin the series of differentiation steps leading to meiosis and spermiogenesis. The endocrine regulation of spermatogenesis occurs by the interplay of gonadotropins and steroids with the somatic cells of the seminiferous tubules (Sertoli cell and Leydig cells) and of vitamin A directly with the germinal cells.

The research in my laboratory has been directed towards the understanding of mammalian spermatogenesis at the molecular level. Our current studies are focused on the role of vitamin A in this process. In particular we are interested in the mechanisms by which retinoic acid (vitamin A) influences the commitment of germ cells to enter meiosis. These mechanisms are central to the timing of sperm production and the organization of gametogenesis.

In our initial approach we developed extensive mRNA and microRNA expression data bases for both germ cells and somatic cells in the testis using array technology and we are currently enhancing that information using next generation sequencing. Our databases cover nearly all aspects of spermatogenesis including cell specific expression and hormone responsive transcription and are used by investigators worldwide. Our latest emphasis has been on discovering the genes expressed in germ cells that enable the entry of these cells into meiosis. We then examine the role of these genes using a variety of genetic approaches with transgenic mice. The projects span the disciplines from biochemistry to genetics to cell biology.